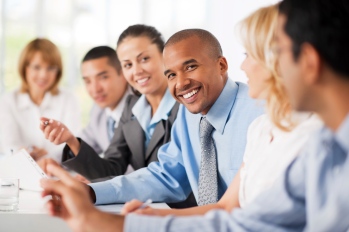 I hope you’re smiling now!  In the last post, we talked about the benefits of smiling.  Incase you weren’t convinced, here are five more reasons to smile:

Still smiling?  After reviewing all this evidence, it just makes sense to smile as much as possible.  To use another idiom, “put on a happy face.”  No extra time or money is required to perform this activity and the payback can be realized immediately.

Want to learn more about improving your outlook, appeal and presence?  We invite you to attend Powerful Presence, our 3-Day Intensive Workshop.   You’ll learn how to leverage your personal talents to be your best self and create an amazing and Powerful Presence.

When I coach runners, I’ve always told them to smile when they train and it will feel easier.  They thought I was crazy, but it worked!  In fact, you can always see me smiling when I am out running; it just makes me happier and makes the effort seem easier.  You’ve probably heard the popular idioms, “Smile at the world and the world smiles back,” and “grin and bear it.”  Conventional wisdom says that smiling makes things better, even easier.  And, the good news is that research has been proving what conventional wisdom has said for years.  Smiling has been proven to reduce stress, boost immunity, increase positive feelings, decrease depression, increase attractiveness and appeal, improve relationships, increase awareness and mental flexibility, lower perceived effort and produce higher income.  Whew…that’s a long list.

In essence, smiling is one of the simplest acts that you can practice daily to achieve positive physical and psychological heath benefits.

Smiling has been scientifically proven to positively boost a person’s mood and lower their anxiety.  Psychological scientists Tara Kraft and Sarah Pressman of the University of Kansas conducted a study to determine if there was scientific evidence that smiling affects individuals’ stress recovery.  They looked at two types of smiles: standard and genuine (Duchenne) smiles. Standard smiles use only the mouth muscles and genuine smiles use the muscles around the mouth and the eyes.  The first phase of the study was training participants to hold chopsticks in their mouth in such a manner that would either create a neutral facial expression, a standard smile, or a genuine smile.  The second phase was testing which consisted of the participants keeping the chopsticks in their mouth, as they had been taught, while performing two different multitasking activities that would cause stress.  Half of the entire group was told to smile while they preformed the task.  The participants’ heart rates and self-reported levels of stress were measured while they performed each activity.  The results of the study showed that participants who were instructed to smile had lower heart rates after activity recovery then the participants who held a neutral expression.  Even the participants who were forced to smile due to the chopstick positioning, but were not told to smile, experienced lower heart rates than the neutral expression group, although the difference was not as great. The group who held a genuine smile and who were told to smile had the most significant reduction in stress.  The researchers concluded, “These findings show that smiling during brief stressors can help to reduce the intensity of the body’s stress response, regardless of whether a person actually feels happy.”  See, smiling makes things feel easier!

Because smiling reduces stress, it allows the body’s immune system to function better. This means that smiling could protect people from catching the common cold or flu.  Added to that, because smiling causes lower blood pressure, it can support heart health. END_OF_DOCUMENT_TOKEN_TO_BE_REPLACED

When I was a kid I used to throw my arms up in victory before a big test, performance or anytime I wanted to pump myself up.  Then afterwards, I would throw my arms up again in celebration.  I still do this today whenever I need a little boost before a race, presentation or important meeting.  In case you were wondering, since I’ve grown up I usually do this in the bathroom so as not to be considered strange (I do miss those “care for not” days of youth).   I coached my teams to do this and, while they said they felt better, they often wondered if it was just in their heads, just a psychosomatic response.  We’re such an empirical society, that we often want scientific proof before we’ll believe something.  That’s why I was so excited to watch Amy Cuddy’s talk on TED Talk, “Your body language shapes who you are.”  In this talk she explains that holding a “Power Position” such as standing with your arms in the “V” position for two minutes, lowers your cortisol and raises your testosterone.  Meaning, you’ll feel 20% more powerful and 25% less stressed.  She states that “Our bodies change our minds.”

In addition to changing our own minds, it appears that it changes other’s minds too.  In the same study, participants who did the “Power Pose” before an interview were rated as more competent and desirable.  Talk about positive communications!  I believe this because I’ve experienced it.  It’s worked for me and countless others I know.  Think about it…how many times have you thrown your hands up in victory when you accomplished something great?  So, why not do it beforehand to get that same feeling?  The next time you feel anxious, stand with your hands held high in a “V” shape for two minutes.  See how you feel and let us know what you experience.

If you’d like to learn more about feeling more powerful and building your self-confidence, attend our next 3-Day Intensive Workshop.